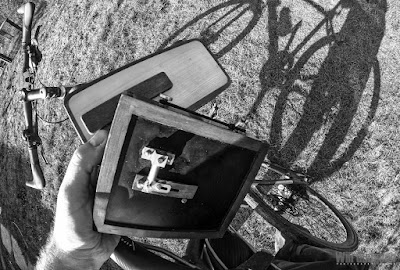 Over the weekend I got out for another pinhole bike ride (pinhole bike ride #1)
This time I cycled 19 miles, visited 6 countryside churches, used 2 pinhole cameras (ZeroImage & ONDU 6x12), Shot 6 sheets of Fomapan 100 and 1 roll off Ilford fp4 125.
The whole thing went well but not as successful as I hoped, my original plan for the day was to head to the beach, but with it being a lovely sunny weekend everyone heads to the beach and a busy beach wasn't what I needed, so packed as much as I could into a smaller bag and headed off on the my bike to the countryside.
I had my Zero Image 4x5 pinhole camera, 3 film holders, ONDU 6x12 pinhole camera, Koolehaoda Q-666C Carbon Fiber Tripod and a Folding Z Flex Tilt Head.
This was the first time I had used my ONDU 6x12 pinhole in a while and unfortunately not all went to plan, I had forgotten it wasn't as wide vertically as the Zero 45 which I have used so much more and my compositions were all a bit sloppy.
I also had trouble with my tripod centre column getting stuck, my phone started playing up which I use as a light metre and for working out the shutter speed and reciprocity failure, also some harsh sunlight also made things a bit more challenging, everything took longer that I expected and I got very hungry.
However, here are all 12 images from my bike ride
Church Number 1
The Church of St Peter ad Vincula lies in Folkington.
The current building dates from 1520, although the church was established several centuries earlier. 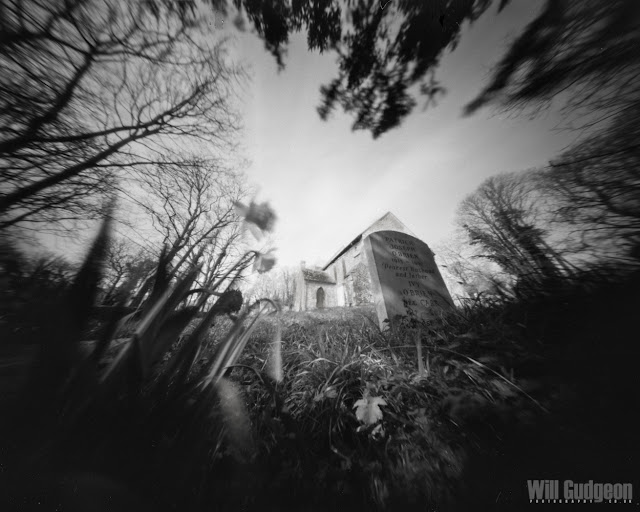 I struggled to find a good spot away from the direct sun, I found this little corner with some daffodils.
I was hoping to get more of the church visible

In the grave yard
Church number 2
St Mary and St Peter's Church, Wilmington
12th Century church which was founded, with the neighbouring Priory, by Benedictine monks.
Also a 1600 year old yew tree stands in the grave yard, currently being supported with wooden posts. 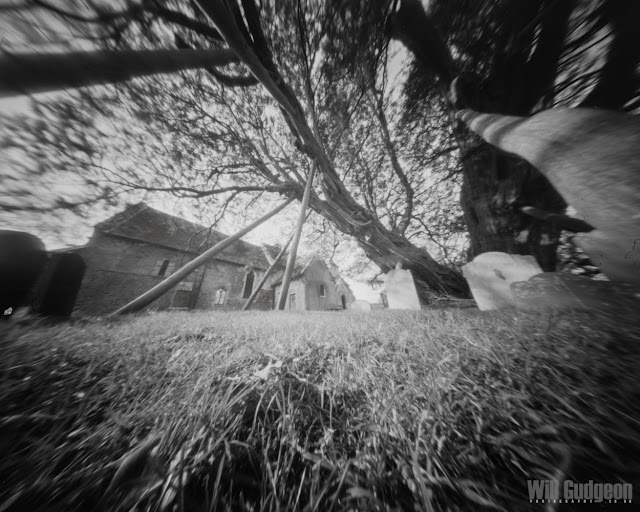 The beams holding up the old yew tree.
Had some harsh sunlight to the side, managed to get the camera in some shade from the post next to it.

I had great visions for this image, and it failed in every way.
Not centred, aimed too low, funny fogging on the side.
I sometimes think a 6x17 would be better....
Church number 3
The Church of the Good Shepherd, Lullington
The church dates from the 13th century, with the list of vicars extending back to 1356.
It is the smallest church in Sussex, and one of the smallest churches in the country, being 16 feet square. 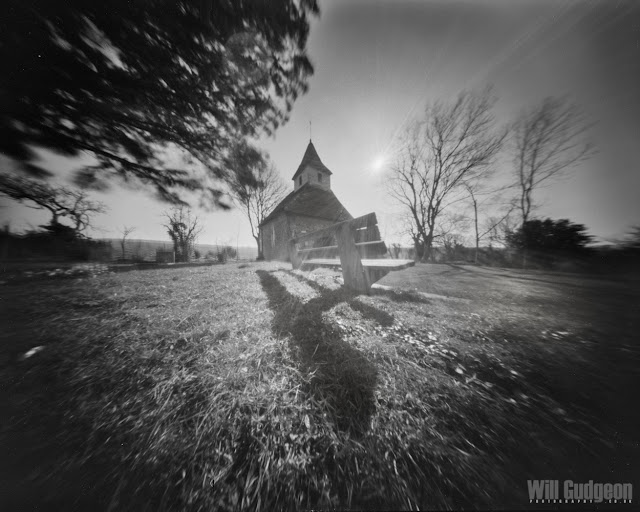 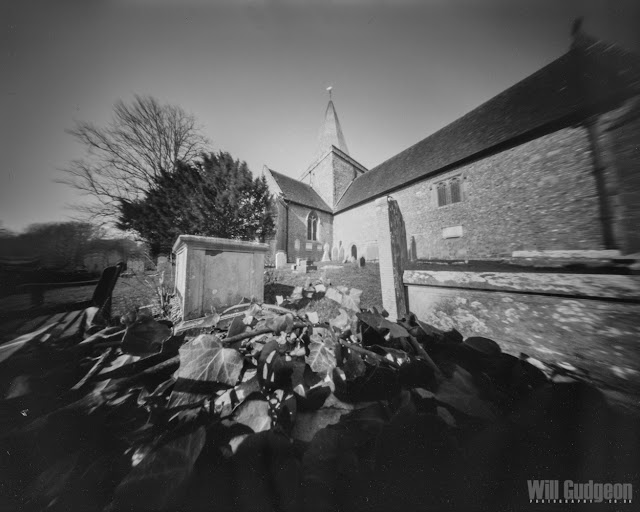 On top of a grave covered in ivy 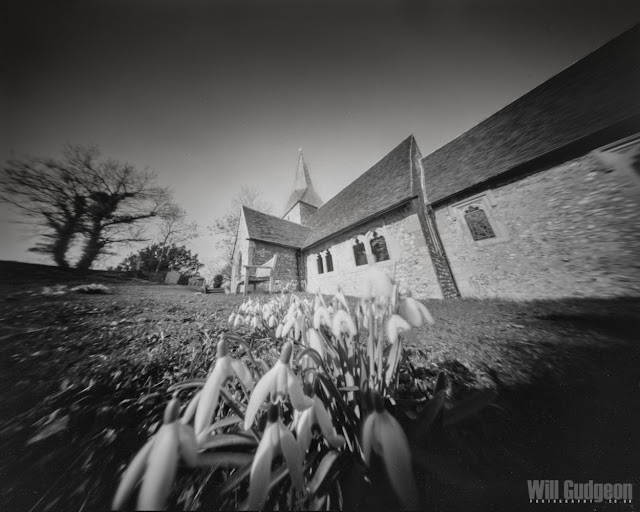 I am pleased with this, would of maybe changed the compassion slightly moving the camera so the snow drops were more to the right of the picture

Another shot pointing to low with the ONDU
Church number 6
The Church of St. Pancras, Arlington
The church building dates back over 1000 years and bears an ancient dedication to St Pancras - the son of a Roman nobleman who was beheaded in 304 aged 14, for refusing to renounce Christianity. 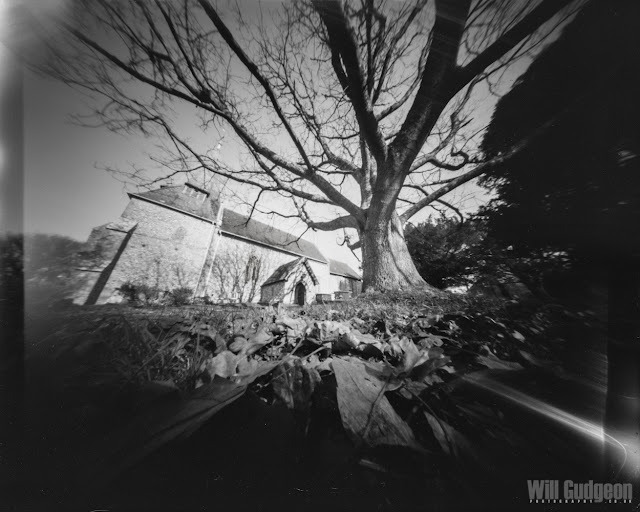 Light leaks make it Art??
Clearly a some point I may have accidentally slightly open the dark slide, possibly getting it out the the bag, which was a bit tight.

Not sure what happened here, this was the end of the film and think it may have roll back on to itself slightly as some of the edges of the images had "wobbles".

Thoughts on this shoot
Overall I really enjoyed it, it is always nice to be out on the bike and pinholes cameras are nice and light to carry around. I have every intention of going back to each of these Church's, but maybe individually with more of any idea and plan in mind of what to shoot. The sun was harsh which made things harder, so an overcast day or choosing a different time of day will be more preferable, the few issues with my tripod centre column getting jammed as I was changing it about a lot with the Z plate, have now been sorted, also with my phone playing up which I rely on to much, I use it as a light metre, working out shutter speed and reciprocity failure, I think I now need a dedicated light metre.
I am pleased with most the shot with the Zero Image, not so much the ONDU images, this was down to my own fault, and need to take more time to think about the images when composing and being more prepared before hand.
Watch the Video
Kit used on this shoot
See my Full kit list here
If you would like any of the photos in this post, my favourite are available on my site.
You can purchase digital downloads for personal use and Editorial use, also Giclée art prints, Framed Prints and Canvas Prints.
https://www.willgudgeonphotography.co.uk
Or a wide range of products are available for world wide printing and delivery through my
RedBubble Store