on April 16, 2020
If you are unsure who Chris McCaw is, he does a wonderful series of photographs called "sunburn'. Using hand-built cameras as big as 30 by 40 inches, which are equipped with large aerial lenses designed to allow a maximum amount of light to pass through, he creates long exposures of cityscapes and landscapes capturing the trail of the sun for either a few hours to an entire day.

Solargraphy photos are normally done with pinhole cameras, however with Chris McCaws work using large format cameras with large lenses, the concentrated sunlight passing through the large optical elements actually scorches an etched path across the surface of the paper, similar to burning something with a magnifying glass. The final results are fascinating and beautiful.

Using some Ilford light sensitive paper, same I use for my solargraphy photos, I cut a small piece of the Ilford paper and cellotaped it inside the film holder, attached it to my RB67, stuck it in the back window, had the camera apertures open wide, focused on infinity, fired the shutter with the camera set to "T" or bulb for most cameras, which means the shutter will stay open until you decide to close it and walked away. 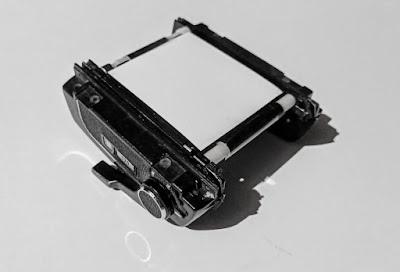 I was expecting the paper just to turn dark allover with maybe a small mark from the sun, as when the paper is exposed to the sun for even a short period of time it changes colour, you can see that happening in this short video I did with the kids. Using a lens with a wide aperture is exposing a lot of light to the paper, a lot more that a pinhole camera does.

If I was to put the exposed paper through developer it would just turn black, as it would be massively over-exposed. The image projected though the lens, or pinhole on a solagraph is visible on the paper, watching the video I linked above may make more sense of that.

So after around a 6 hour exposure, I closed the shutter just after sunset and opened the film holder to find my image on the paper. Unlike Chris McCaw's work, mine was not actually scorched onto the paper, there had been no smoke coming out of my RB as the sun burned the paper, but I was a little surprised how much detail was there. 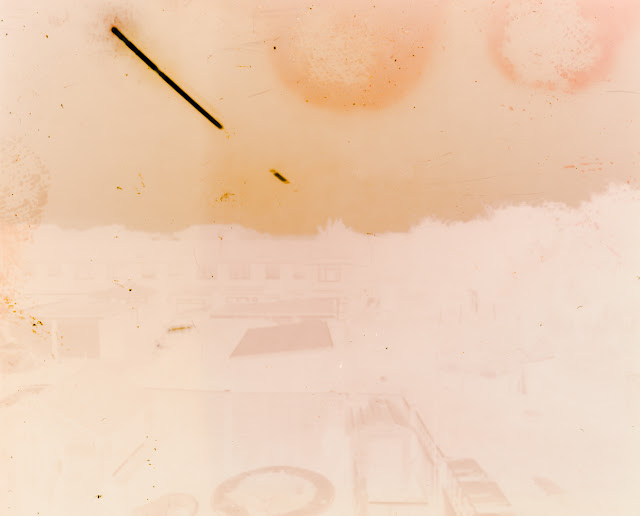 After scanning and inverting the colours in Lightroom and converting to B&W this was the image I had. This was shot through a double glazed window, which explains the reflection on the sun trial and the dark left half of the image, the 2 big marks in the sky are my fingerprints, also down the side, and all the scratches are from a few attempts at different ways of loading the paper, it was not treated well. However it is a clear view from the rear of our house and the trail of the sun setting in the afternoon, which stops when the clouds cover it. 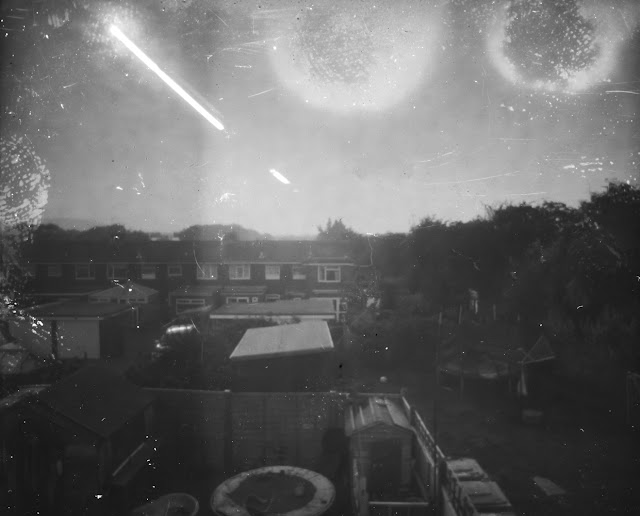 I did also do a pinhole solargraph out of this window the day before which you can see in my previous post.

Overall the image is definitely not amazing, or even that good to be honest, but the results are interesting and a lot of different images could be made using this technique, if you are happy to sit in one spot for hours on end, on the plus side you don't need to worry about darkrooms or developing film.

This would definitely be easier with at least a 4x5 camera using 4x5 film holders, loading paper into a 120 film back was not the best.

Now to find another lockdown project.