TurnsPro is a motorised rotating Time Lapse Camera Mount which has a 360 degree rotating head for for Smartphones, Action Cameras, Compact cameras and DLSRs, designed by a small start up product development company based in Plymouth, England, UK.

Rotation direction - Rotate clockwise or anticlockwise or pan back and forwards over a set angle from 15 to 360 degrees in 15 degree increments.

Manufacturer - Designed and made in Devon in the UK by TurnsPro.

What's in the box
In the box is the TurnsPro, a smartphone clip and the TurnsPro box.
The box has all the instructions on it with how to use it. 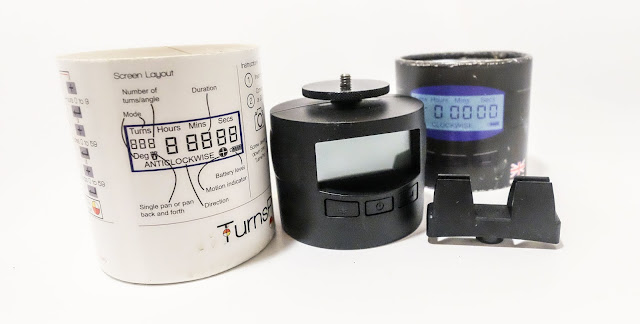 Size
The TurnsPro is 80mm x 80mm x 80mm, this is a really decent size and it is a perfect fit for a lens compartment in any camera bag, this doesn't take up too much room so is an ideal travel item.
Mounting it to a tripod or sitting it on the ground?
The TurnsPro has a 1/4" female thread tripod on the bottom allowing it to be attached on top of a standard tripod head. If you want to attached straight onto a tripod legs, you will need at Tripod Head Screw Converter From A 3/8" Female Thread To a 1/4" Male Thread.
I use a Manfrotto one which has a larger base for more support.
The TurnsPro weights 300g with batteries, so with a smaller camera or actions camera it is heavy enough to support siting on a flat surface.

From Left to right
TurnsPro on Ball head mount - On ball head mount, with another ball head mount on top - On ball head mount with GoPro - Mounted on the Manfrotto 3/8 to 1/4 converter - mounted on 3/8 to 1/4 converter with ball head.
Batteries
The TurnsPro uses 4aa batteries, the advantages of this is they are easy and cheap to get hold off, rechargeable batteries are also affordable.
The 4aa batteries will give approximately 10 hours operation time with a decent set of batteries, this will also depend of temperature as colder weather tends to drain batteries faster.
It would be nice to have a USB connection on the TurnsPro so it can run off a power bank.
LCD Screen
The LCD screen is small and simple, on the LCD you can set the TurnsPro to suit your shot.
The 3 buttons on the front control the TurnsPro.
The middle powers ON and OFF
You can specify a single rotation time from 20 seconds to 10 hours, have it rotate anything from 15 to 360 degrees in increments of 15 degrees, clockwise or anticlockwise, keep rotating around or rotate back and forth. Backlit display for nigh time use.
The only downside of the LCD is there is no back button, make a selection you don't want, you need to turn off and on to reset.
What can you mount onto it?
The TurnsPro can hold a max weight of 1kg, this will hold all action cameras, small digital and smartphones really well. Mounting most DSLRs onto the TurnsPro will be fine but adding a small tripod head adds a lot of extra weight. Mirrorless cameras are a lot lighter, my Fuji X-T1 with a Samyang 12mm and small ball head tripod mount weighed around 1kg and worked really well.
What else is available?
TurnsPro also sell a selection of other products for the TurnsPros.
Tripods, Ball heads, GoPro mounts, and a Motorised Slider Adaptor Kit, if you have a camera slider you can use the TurnsPro to motorise it, or buy a TurnsPro slider.
I did make a slider kit for my Neewer carbon slider which worked well, but the TurnsPro one is a much better set up.
This is my DIY version in action.
TurnsPro Website
TurnsPro Amazon Store
TurnsPro eBay store
Pros
Cons