The other day I received my new (to me) camera in the post. 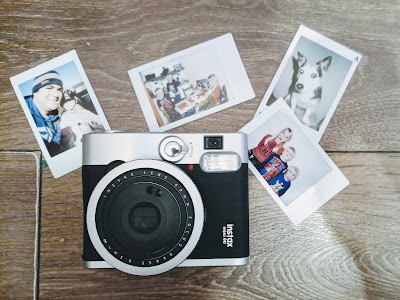 This is an instant film camera using Fujifilm instax mini-type film to produce instant credit card sized prints.
WHY DID I BUY THIS.
Firstly, It was a cheap buy, compared to what most of them sell for second hand.
Secondly, I have been after a camera for trips and moments with the family. I had been looking at some 35mm cameras, but I wanted something I knew I would print from. With past 35mm cameras I end up developing the film, scanning it then leaving it on the computer.
So an instant film camera was put on the cards and after much researching, this was the one I wanted, nice looking and small enough to comfortably it in my pocket.
Thirdly, The kids love it. Do love watching the film appear from the camera and slowly developing in front of them.
Got a bulk load of film on the way in the Black Friday, cyber Monday sales, can't beat some cheap film.
This will mostly be used for family stuff so won't be sharing a lot of photos from it, but will do a few series with it to see how it performs and what the results are like it different situations.
Features:
Film: Fujifilm Instant Color Film
Film size: 86mm x 54mm
Picture size: 62mm x 46mm
Lens: Move in / out type lens, 60mm, F=12.7
Viewfinder: Real image finder, 0.37x
Shutter Speed: Programmed electronic shutter release, 1.8 – 1/400 sec. shutter speeds (macro mode: aperture automatically fixed at F22.
Bulb mode: maximum 10-second shutter open time.
Self-timer: 10 second delay
Flash: Automatic electronic flash (with brightness adjustment function), forced firing mode (with brightness adjustment function), flash off mode, red eye reduction mode
LCD: Exposure counter, Macro mode, Brightness control, Self timer, Flash ON / OFF, Mode button(Party / Kids / Landscape / Double exposure / Bulb)
Power supply: NP-45A lithium-ion battery
Dimensions & Weight: 113.4mm x 91.9mm x 57.2mm, 296g (excluding the battery, strap and film)